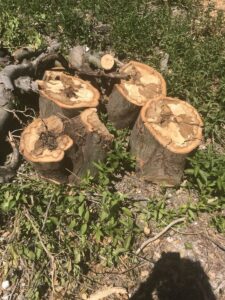 Ash dieback is a deadly fungus transmitted through spores, not unlike viruses in the human population. It is predicted it could kill up to 95% of the UK’s ash stock. This particular area of the country has been very badly affected by the disease.

The first sign of dieback is leaf loss after which the weakened trees are also vulnerable to other infections, such as honey fungus, and can shed limbs or even fall without warning.

Having sought professional advice and been granted a felling licence by the Forestry Commission, swift action was taken to remove the diseased trees.

Falling trees are dangerous to people, animals and the ecosystems around them.  Removing them was the only way to ensure the area was safe.