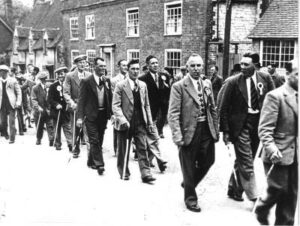 According to local tradition, it was in the year 1800 that a friendly society was formed in Harting. At some early date the name Harting Old Club was adopted, though the official title, Harting Friendly Society lingered on until 1951. A rival club that sprung up in 1882 lasted for nearly 50 years. After a century of inestimable benefit to the working men, and so meeting the challenge of national friendly societies, the Harting Old Club was retained to supplement other benefits from national insurance schemes in the last century. Whereas many village clubs never revived their annual feast when the wars ended, Harting saw to it that both Club and Feast remained. An independent village friendly society is now a rarity, especially one which keeps up its insurance work, feast and customs.

The main rule of the Club has always been “that the intent and purpose of its establishment is for raising a common stock or fund for the support and maintenance of its members in old age, sickness or infirmity, and for their decent burial………”. Another rule provides for a yearly feast and another describes the procedure of members who shall “….dissemble themselves together on Whit Monday, every year, between the hour of nine and ten o’clock in the morning at the said clubhouse, and from thence proceed in a direct and orderly manner to the Parish Church to hear a sermon preached by the minister of the parish for the time being….” (Fine of 5p for those who missed this).

The Club’s officials consist of two Trustees, Honorary Secretary, four Stewards and two Flagmen, and the Club at present has approximately seventy members. In 90 years there have been only ten Trustees, the present ones being Mr D Barnard (since 1986) and Mr P Glue (since 1995). In the past 80 years there have been only six Secretaries, the present one being Mr K Clue (since 2013).

Any healthy male between 15 and 45 years of age can join, subscription £5.00 per year. Sickness benefits of £1.20 per week are paid when a member is ill, up to a continuous period of nine months. After that, or it is considered he is unable to work for his living, he is superannuated and receives £12 per year for the rest of his life. When a member dies, £60 is paid towards his funeral expenses and it is an unwritten rule that a member receives £20.00 if his wife dies.

Although perhaps nowadays not all the rules and customs are strictly adhered to, and the amount of sickness benefit is not great, nevertheless the basic principles and traditions remain the same as they were in 1800. As was recently written, the Old Club is now rather like an old oak beam in a modernised cottage: not essential perhaps, but still a useful, pleasing feature in changed surrounds. Whether it owes its preservation as much to the thorough “oiling” it once annually received and still gets in a mild and colourful form each year, as to its own steady character and sterling purpose, is another matter!